About Us | One Family’s Musical Journey

Our family moved to Bend from Austin, TX back in 2012. Our three sons were all interested in music as young children. They took some piano lessons and did the usual kid-oriented music lessons with recitals routine. Then in 2009 we took the boys for their first time to the Austin City Limits music festival to catch a band called Galactic play some New Orleans style Funk-driven Rock & Roll. It was gas on a fire! The boys were blown away. We needed guitars, we needed amps, we needed drums, we needed PA’s – and we needed them asap. 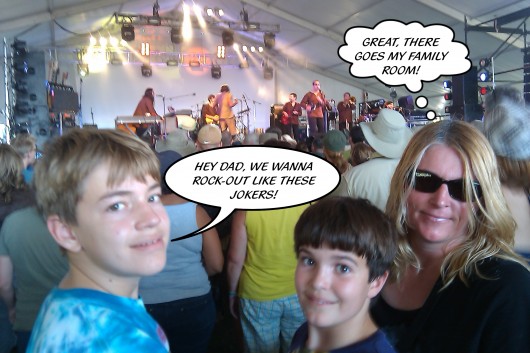 About that time a franchise of the Paul Green School of Rock moved into central Austin down the street from our home. We signed up the boys, and within 2 short years (and some 6 performances later) they went from nervous statues on stage to playing lead instruments front and center for their bands. Check out the Crock Blog for some video history. It was infections. Kids from their school saw these bands play, and they joined up too. The performances were explosive!

Here in Bend we dug hard to find the best resources for the boys to continue their musical journey. In addition to finding some of the best independent teachers in town (see The Team), we also frequent the Cascades School of Music to take lessons and occasionally participate in their version of the School of Rock. One ensemble was just not enough – and the kids wanted something more akin to what they had experienced down in Austin.

So in September of 2012 we started the Cascades Rock Ensemble – otherwise known as CROCK! Surely all the double meanings grab you (think about it!). Plus it’s a great name to chant! CROCK is an informal not-for-profit gathering of would-be musicians and we guarantee 100% of any CROCK fees go directly towards instructor time plus equipment & venue expenses. We’re not in it for the money. It’s about rocking and rolling!

Our goal is to develop successful, stable ensembles that instill that inspirational desire to rock-out on stage here in Central Oregon. There is nothing quite like watching CROCK participants come-off a stage beaming with a smile and livid with enthusiasm for music!

Please come join us. We’ll work hard – and within a short time you will become an exceptional musician & performer. The love of performing will never be extinguished!